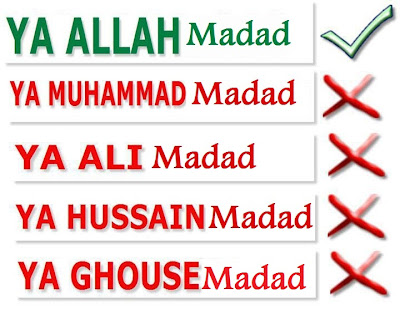 Proof:-1
Allah says,''But Allah is your protector, and He is the best of helpers.(Surah Al-Imran Ayat-150)

Proof:-2
Allah says,''Say: “Nothing can happen to us except what Allah has ordained for us. He is Our Master. It is in Allah that the believers should put their trust.”(Surah at-Tawba: 51)

Proof:-3
Allah says,''If Allah helps you, none can overcome you; and if He forsake you, who is their after Him that can help you? And in Allah (alone) let believers put their trust.'' (Al-Qur'an 3:160)

Proof:-4
Allah says,''And when My servants ask you, [O Muhammad], concerning Me - indeed I am near. I respond to the invocation(pukar) of the supplicant(Dua mange wale) when he calls upon Me.So let them respond to Me [by obedience] and believe in Me that they may be [rightly] guided(Surah Baqarah Ayat-186)

Proof:-5
Allah says,"put your trust in the Living One(Allah), Who will never die, and glorify His praises; Sufficient He is, in being aware of the sins of His Ibaad." [Soorah al-Furqaan (25): 85]

Proof:-6
Allah says,"So seek with Allah your sustenance and worship Him (alone), and be grateful to Him. To Him(Alone) you will be brought back." [Soorah al-Ankaboot (29): 17]

Proof:-7
Allah says,''And your Lord said: “Invoke Me [i.e. believe in My Oneness (Islamic Monotheism) and ask Me for anything] I will respond to your (invocation).” [Ghaafir 40:60]

Proof:-8
Allah says,''And if Allaah touches you with hurt, there is none who can remove it but He; and if He intends any good for you, there is no one who can repel His Favour . . .”[Surah Yoonus 10:107]

Proof:-9
Allah says,'You (mankind) have none, besides Him(Allah), as a Wali (protector or helper) or an intercessor. Will you not then remember (or receive admonition)?" [al-Sajdah 32:4]

Proof:11
Imam Ahmad reported that a man of Balhajim said: "O Messenger of Allah, what are you calling for'' He said:(I am calling people to Allah Alone, the One Who, if you call on Him when harm befalls you, will relieve you; and when you are lost in the wilderness, you call on Him and He brings you back: and when drought (famine) strikes, you call on Him and He makes your crops grow.)
(Ref:-Musnad Ahmad hadith no: 19718; Quoted by Ibne Kathir In his Commentary of Quran Under 27:62)

b)Invoke(pukaro) not anyone beside Allah

Proof:12
Allah says,'Ask them (O Muharnmad!): "Shall we invoke, apart from Allah, something that can neither benefit nor harm us, and thus be turned back on our heels after Allah has guided us? '(Surah Al-An'aam Ayat-71)

Proof:-15
Prophet(S.A.W) said,''When you ask for anything then ask Allaah only, if you need help then seek it from Allaah, and know that if all the people gathered and intended to harm you then they cannot do so except that which Allaah has destined for you....”(Tirmizi Hadees 2516)

Proof:-17
Salihibn Abdullah reported from Ja’faribnSulayman from ThabitBunani that Allah’sMessenger (peace be upon him) said, “Each one of you must ask his Lord for his needs, even for salt and also for the thong or strap or lace of his sandal or boot when it is cut off.”(Da'eef)
(At Tirmidhi – book no. 51 - Book of supplication, chapter 139, Hadith no. 3624)

Proof:-18
Prophet(S.A.W) said,''When you ask for anything then ask Allaah only, if you need help then seek it from Allaah, and know that if all the people gathered and intended to harm you then they cannot do so except that which Allaah has destined for you....”
(Tirmizi Hadees 2516,)

Proof:-19
Allah says,'Say, "Indeed, I(prophet Muhammad) do not possess for you [the power of] harm or right direction."(Surah Jinn Ayat-21)

Proof:-23
Ali ibn al-Husayn (may Allaah be pleased with him) saw a man entering through a gap at the grave of the Prophet (peace and blessings of Allaah be upon him), and making du’aa’. He told him not to do that and said, “Shall I not tell you a hadeeth that I heard from my father from my grandfather from the Messenger of Allaah (peace and blessings of Allaah be upon him)? ‘Do not take my grave as a place of festivity (which you visit repeatedly) and do not take your houses as graves. Send blessings upon me for your greeting will reach me no matter where you are.’”
رقم الحديث: 460
حَدَّثَنَا أَبُو بَكْرِ بْنُ أَبِي شَيْبَةَ ، حَدَّثَنَا زَيْدُ بْنُ الْحُبَابِ ، حَدَّثَنَا جَعْفَرُ بْنُ إِبْرَاهِيمَ ، مِنْ وَلَدِ ذِي الْجَنَاحَيْنِ ، قَالَ : حَدَّثَنَا عَلِيُّ بْنُ عُمَرَ ، عَنْ أَبِيهِ ، عَنْ عَلِيِّ بْنِ حُسَيْنٍ ، أَنَّهُ رَأَى رَجُلا يَجِيءُ إِلَى فُرْجَةٍ كَانَتْ عِنْدَ قَبْرِ النَّبِيِّ صَلَّى اللَّهُ عَلَيْهِ وَسَلَّمَ ، فَيَدْخُلُ فِيهَا فَيَدْعُو ، فَنَهَاهُ ، فَقَالَ : أَلا أُحَدِّثُكُمْ حَدِيثًا سَمِعْتُهُ مِنْ أَبِي ، عَنْ جَدِّي ، عَنْ رَسُولِ اللَّهِ صَلَّى اللَّهُ عَلَيْهِ وَسَلَّمَ قَالَ :"لا تَتَّخِذُوا قَبْرِي عِيدًا ، وَلا بُيُوتَكُمْ قُبُورًا ، فَإِنَّ تَسْلِيمَكُمْ يَبْلُغُنِي أَيْنَمَا كُنْتُمْ
(Musnad Abu-Ya'la Hadith no.460).]

Proof:-23
Sahih Bukhari : Book 24 : Volume 2 : Hadith 485
The Prophet added, "I do not want anyone of you to come to me on the Day of Resurrection, carrying over his neck a sheep that will be bleating. Such a person will (then) say, 'O Muhammad! (please intercede for me,) I will say to him.
'I can't help you, for I conveyed Allah's Message to you.

Proof:-24
Narrated `Urwa:
Aisha said to me, "O my nephew! We used to see the crescent, and then the crescent and then the crescent in this way we saw three crescents in two months and no fire (for cooking) used to be made in the houses of Allah's Apostle. I said, "O my aunt! Then what use to sustain you?" `Aisha said, "The two black things: dates and water, our neighbors from Ansar had some Manarh and they used to present Allah's Apostle some of their milk and he used to make us drink."
(Sahih Bukhari English reference: Vol. 3, Book 47, Hadith 741
Sahih Bukhari Arabic reference: Book 51, Hadith 2606)

Proof:-25
Surah Fatir Ayat-14.
Allay says,''If you invoke them, they will not listen to your call; and if (in case) they were to hear, they could not grant it to you. And on the Day of Resurrection, they will disown your worshipping them. And none can inform you like Him Who is the All-Knower.)

Tafsir Qurtubee’s Commentry
Meaning is If you Call them for help in hard situations then they can not hear you because they are Jamadaat, they can not see nor hear.
This is Possible that this ayah is for Angels,Jinn, Prophets and Satan they will Reject What have you done and also THEY (the Prophets,jinn and angels will reject that they) told them to worship them, Like EESA ALEH SALAM will say (It was not for me to say what I had no right (to say).

Proof:-27
Sahih Muslim Book 1, Number 0398:
Anas reported: Verily, a person said: Messenger of Allah, where is my father? He said: (He) is in the Fire. When he turned away, he (the Holy Prophet) called him and said: Verily my father and your father are in the Fire.

Proof:-28
Sahih Muslim : Book 4 : Hadith 2129
Abu Huraira reported Allah's Messenger, (Peace be upon him) as saying: I sought permission to beg forgiveness for my mother, but He did not grant it to me. I sought permission from Him to visit her grave,and He granted it (permission) to me.

Al-Nawawi (may Allaah have mercy on him) said, commenting on the first hadeeth:
This indicates that whoever died during the fatrah (interval between two Prophets) following the way of the Arabs at that time, namely idol-worship, is among the people of Hell. We cannot say that the message did not reach these people, because the message of Ibraaheem and other Prophets had reached these people. (Sharh Saheeh Muslim, 3/79.)

Al-Nawawi (may Allaah have mercy on him) said: Whoever dies in kufr will be in Hell and his blood ties will not benefit him at all. (Sharh Saheeh Muslim, 3/79.)

Proof:-30
Sahih Bukhari : Book 47 : Volume 3 : Hadith 786
Narrated Anas bin Malik:
A Jewess brought a poisoned (cooked) sheep for the Prophet who ate from it. She was brought to the Prophet and he was asked, "Shall we kill her?" He said, "No." I continued to see the effect of the poison on the palate of the mouth of Allah's Apostle .

Proof:-31
Sahih Bukhari : Book 59 : Volume 5 : Hadith 713
Narrated 'Aisha: The Prophet in his ailment in which he died, used to say, "O 'Aisha! I still feel the pain caused by the food I
ate at Khaibar, and at this time, I feel as if my aorta is being cut from that poison."

Proof:-32
Sahih Bukhari : Book 71 : Volume 7 : Hadith 658
Narrated 'Aisha:
A man called Labid bin al-A'sam from the tribe of Bani Zaraiq worked magic on Allah's Apostle till Allah's Apostle started imagining that he had done a thing that he had not really done. One day or one night he was with us, he invoked Allah and invoked for a long period, and then said, "O 'Aisha! Do you know that Allah has instructed me concerning the matter I have asked him about? Two men came to me and one of them sat near my head and the other near my feet. One of them said to his companion, "What is the disease of this man?" The other replied, "He is under the effect of magic.' The first one asked, 'Who has worked the magic on him?' The other replied, "Labid bin Al-A'sam.' The first one asked, 'What material did he use?' The other replied, 'A comb and the hairs stuck to it and the skin of pollen of a male date palm.' The first one asked, 'Where is that?' The other replied, '(That is) in the well of Dharwan;' " So Allah's Apostle along with some of his companions went there and came back saying, "O 'Aisha, the color of its water is like the infusion of Henna leaves. The tops of the date-palm trees near it are like the heads of the devils." I asked. "O Allah's Apostle? Why did you not show it (to the people)?" He said, "Since Allah cured me, I disliked to let evil spread among the people." Then he ordered that the well be filled up with earth.

Proof:-33
Prophet(S.A.W) said,''When you ask for anything then ask Allaah only, if you need help then seek it from Allaah, and know that if all the people gathered and intended to harm you then they cannot do so except that which Allaah has destined for you....”
(Tirmizi Hadees 2516,)